The Guns and Weapons Thread

Holy crap this is crazy. I imagine one day this will become the norm...

"Taya Kyle, the widow of legendary Navy SEAL sniper Chris Kyle, shocked onlookers at the American Sniper Shootout when she beat champion marksman Bruce Piatt, one of the top professional shooters in the world, with a perfect score. The competition not only marked Kyle’s first foray into professional shooting, but also pitted TrackingPoint’s Precision-guided Firearm (PGF) technology against the skill and experience of an expert shooter. The result was noticeably one-sided."

http://www.outdoorhub.com/news/2015/12/ ... -shootout/
The follies which a man regrets the most in his life are those which he didn't commit when he had the opportunity. - Helen Rowland, A Guide to Men, 1922
Top

That gave me a small boner. That is freaking cool.
Insert Banner Here
"The internet is bullcrap! And everyone on it is retarded!" - Muspar
"All threads should degenerate into the bumming of JermCool." - Rorschach
Top

So I went ahead and ordered a Vortex Strikefire II 4MOA red/green dot from Optics Planet for $164 shipped, to put on my AR to replace the old BSA play-like scope, 3-9x40. That's instead of spending $400 on an Aimpoint Pro Patrol. I'm not sure if I should've gone ahead and said screw it and gotten the Aimpoint. Maybe when I eventually get around to a 9mm AR. I decided that I've got plenty of rifles for longer range work, and I want something that can put zombies down quickly and easily. In that theme, I also picked up a Leupold VX-1 Shotgun (1-4x20) for the Browning BLR lever action .308 with its nice compact form. I'll take the VX-3 3.5-10x40 that's on it now and put it on the Remington 700 in .308 for which I finally got in the Magpul Hunter 700 replacement stock...

In the meantime, inspired by some DIY target stands I came across online, I went ahead and put together a couple of my own from 1.5" PVC. I made the three front/middle/back cross sections 21" each, the sides and uprights 16" each, with a couple extra 3" pieces cut from what's left to stick in the top of the upright tees, and with the four elbows and four tees, it comes out perfectly at 25 inches wide to the outside and starts at just about 23.5" which allows a 45" (or 48") tall target to hit 6' tall on the furring strips, making it just right. With this design, each stand takes just under 14 feet of PVC so a 10' stick and a 5' stick is plenty. You can do it cheaper, but this setup feels very solid without even gluing the pieces together. I built them because we're hosting a CHL (now LTC, License to Carry) class this Saturday on the property, and I wanted to make sure we could get through 8 to 12 people quickly. 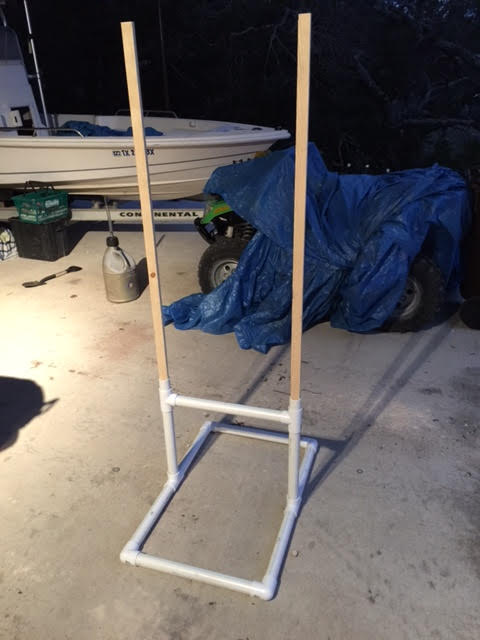 And since I now have targets and a cleared 100 yard lane into a 400' tall hill backstop in the distance, and since I'm swapping out scopes and considering zeroing in the red dot at something less than 100 yards, I started looking into what people might think the best distance is to zero an AR. Of course there are all kinds of different opinions out there. But as I'm googling around, I end up coming across a few people who swear that Maximum Point Blank Range is really the only thing that makes sense. It sounded silly to me, because I think of point-blank range as, well, point-blank, right there just a few feet in front of the muzzle. What kind of maximum could you be talking about?

Well as I looked into it I found out that really it's strategy for zeroing optics and sights. Its purpose is to let you make a vitals shot from point blank range to as far out as possible without you having to do any kinds of calculations or holding the scope up over the target by a certain amount and hoping you guessed right (not just about the amount but about the range, which most of us aren't so great at estimating down to the 10-yard increment at distance). Instead, you set it up such that you pick a target diameter (say 4" for an extremely comfortably tight circle on a whitetail deer--most people estimate more like 8" and then maybe 18" or even 24" for really big game like elk with a really big vital area kill zone), and rather than zeroing in the rifle at exactly 100 yards, you map it out so that the bullet trajectory never goes more than 3" higher than your point of aim or 3" lower, throughout the duration of your shot out to your maximum point blank range. As long as your marksmanship is at least mediocre, then regardless of whether the deer is 30 yards away or 200 yards away, the shot will land properly in the vitals, ensuring a clean, ethical kill. And you don't have to really think very hard about the point of aim and trying to figure out bullet drop and trajectory and ballistic coefficients while also trying to make a good shot.

Basically imagine you're shooting down a 4" invisible pipe, and when the muzzle is right in the center, your maximum point blank range is the distance where your bullet rises up and eventually falls back down to to that level without ever actually touching the pipe. For most general off-the-shelf non-magnum rounds, that turns out to be a zero at around 200 yards and a MPBR of around 230 yards. I've done the calculations for my inexpensive but reliable Hornady American Whitetail rounds (which are their InterLock spire points) in .223, 7mm-08, and .308 rounds. Even venturing into faster and flatter rounds like .25-06 and 7mm Rem Mag just stretches it out a little farther to more like 250 yards. As compared to zeroing at 100 yards, where a 230 yard shot will not be 2" low but rather over 6" low. That's a very big difference when hunting at distance, because at 300 yards that's 14" low with a 100-yard zero and only 8" low when set up for MBPR on a 4" target. That's can be the difference a clean kill and missing altogether!

And yes, that's an extremely conservative 4" and half what most people consider to be a vital shot. So when you calculate a more common larger target area of 8" it stretches out that much further. Now instead of 230 yards being your MPBR and zeroing around 200 yards, you're zeroing at 250 and reaching out to 300 yards MPBR. That means any shot you take between point blank and 300 yards requires no thought, no hold-over, just aim for the center of the vitals where you normally would, and you should be good.

The difference for someone like me that's always zeroed at exactly 100 yards is that when setting it up for MPBR for a 4" target it'll be somewhere around just a little under 2" high at 100 yards. And for an 8" target it'll be 3.5" high. It feels pretty weird to think about. And since around here I'll almost never take a shot over 100 yards, I think most of my hunting rifles I'll still sight in at 100 yards. But when I'm leaving the property to go where I may be taking much farther shots, I'll have one of my rifles set up for MPBR, and I'll reach for it, knowing I won't have to think too hard about it.

Oh, and the AR? I'll be setting it up for MPBR on a 6" target. That puts the red dot itself at about twice the size of the hit zone at almost 300 yards, with the far zero at 240 yards, which is way more than I could ever need it for. But the near zero is at a lovely 25 yards. Much more realistic. And it will be super handy if I ever decide to take a rifle into a 30-yard bow stand

I'll switch the Vortex to the 9mm AR, where the 4MOA is no hindrance for shots no farther than 100 yards anyway, and get something like the Aimpoint Pro 2MOA for the real AR so the dot marks the target area at 300 yards

The follies which a man regrets the most in his life are those which he didn't commit when he had the opportunity. - Helen Rowland, A Guide to Men, 1922
Top

Canceled that Vortex order, by the way. I'll stick with my cheap old Tasco on a Burris single ring mount. Put the money toward an Aimpoint when it's time.
The follies which a man regrets the most in his life are those which he didn't commit when he had the opportunity. - Helen Rowland, A Guide to Men, 1922
Top

The Quarter Circle 10 setups I shot had no LRBHO issues. But maybe they had simply been professionally tuned.

I've never seriously considered an 80% lower. How hard is it really to get it over the finish line if you've never done it before? Adding $65 for the jig is clearly understandable for this purpose. I guess the good thing is you're at least not out $300 each time if you somehow manage to do something dumb with the drill press. But then you have to coat it. Is it really worth the hassle to finish it yourself? For you is it more the satisfaction with doing it yourself or the preference to finish your own off the books?

https://newfrontierarmory.com/shop/c-9- ... ide-upper/ is that the upper you're talking about? I really do feel like I want that last round to hold that bolt open like every other semi-auto firearm I've ever used. Have you just given up on the idea, deciding you don't need it? Or what?
The follies which a man regrets the most in his life are those which he didn't commit when he had the opportunity. - Helen Rowland, A Guide to Men, 1922
Top

Hey btw what BCG have you been considering? Does it really matter that much?

Other than that, the only thing that's been legitimately weighing on my mind is ensuring the length/rifling combo makes sense for the type of ammo I'd prefer to use, which is the lighter 115gr 9mm.
The follies which a man regrets the most in his life are those which he didn't commit when he had the opportunity. - Helen Rowland, A Guide to Men, 1922
Top

If I could get a slick-sided, side-charging 9mm LRBHO upper, I would do a number of questionable things to get it

The follies which a man regrets the most in his life are those which he didn't commit when he had the opportunity. - Helen Rowland, A Guide to Men, 1922
Top

Ha! Yes, please do!
The follies which a man regrets the most in his life are those which he didn't commit when he had the opportunity. - Helen Rowland, A Guide to Men, 1922
Top

Really? Are you serious? Holy crap that's awesome!
The follies which a man regrets the most in his life are those which he didn't commit when he had the opportunity. - Helen Rowland, A Guide to Men, 1922
Top
869 posts