Perspectives on our world and our universe, how it works, what is happening, and why it happens. Whether by a hidden hand or natural laws, we come together to hash it out, and perhaps provide a little bit of education and enlightenment for others. This is a place for civil discussion. Please keep it that way.
Forum rules
1) Remain civil. Respect others' rights to their viewpoints, even if you believe them to be completely wrong.
2) Sourcing your information is highly recommended. Plagiarism will get you banned.
3) Please create a new thread for a new topic, even if you think it might not get a lot of responses. Do not create mega-threads.
4) If you think the subject of a thread is not important enough to merit a post, simply avoid posting in it. If enough people agree, it will fall off the page soon enough.
5 posts • Page 1 of 1

So one of the officers that Baltimore's Finest put up as a sacrifice on the alter of calming down opportunistic looters and vandals has been acquitted on 4 charges, I think that means all of them. So let's talk about how we all know cops of all colors hate black people and take every available opportunity to shoot them. Right?

Turns out the data doesn't back up the notion that police around the US regularly go around killing innocent black men. Most killed where white men, and three quarters of all kills by police were active threats in progress. Twice as many white people were shot by police than black people, and a quarter of all shootings unsurprisingly were to stop people with a known history of or showing symptoms of mental illness.

For some it's less the race and more that it's the 25% of police shootings that were not considered active threats. Those generally fell to people disobeying orders, behaving erratically, and then pulling out what turned out to be cellphones or whatever when they were thought at the time to be weapons. Put on edge armed men and women who are already holding you at gunpoint because you're acting crazy and refusing to follow instructions, and you shouldn't be surprised when you reach back and pull out a cellphone that they might open fire sometimes.

OK, but about race, whites make up over half the population, more than twice as much of the population than blacks, even when you account for the fact that anyone with a little black in them count as black. But while twice as many white people were shot as blacks, even if you account for allegations (some of them fairly well supported) of institutional racism, it's a question not of raw population numbers but of confrontations with law enforcement, particularly those where officer orders are disobeyed which is where the trouble really starts. Based on the popular storylines in the media, you'd figure a good 90% of those were with black people, with racist white cops seeking out innocent black people to antagonize to the point they can have an excuse to shoot them. But based on the actual numbers that clearly is not the case.

My feeling based on all the news stories I've seen and the cops I know is that a white guy acting in a threatening manner will by and large not be treated differently in any discernible way than anyone else with any other shade of skin color. But far fewer white guys "per capita" will pull that kind of shit in the first place. And apparently black women, despite what you may have seen in news footage and on episodes of COPS, mostly keep from turn into an active threat.

PS Repeal marijuana prohibition finally, and those numbers would likely shift dramatically, in my opinion.
The follies which a man regrets the most in his life are those which he didn't commit when he had the opportunity. - Helen Rowland, A Guide to Men, 1922
Top

I just think it's ridiculous that it took this long for anyone to decide to actually count up how many people get shot to death by police officers in a given year.

Let's just look at this from a power perspective for a second. We have an armed police force with a mandate to enforce laws. We encourage people to trust those police. And unfortunately, by nature of what they do, they might have to fire their weapons at somebody.

We can rest assured that the vast, vast majority of police officers have nightmares about ever having to do that, the way I hope people who carry guns on any level have nightmares about having to do that. (I like to believe that people who carry for protection would be very happy to never have to actually need to protect themselves with that gun.)

But the fact is, people with more power should be more closely-watched. At least that's my worldview. I want full accounts of everyone that gets shot by a cop in a year. Of course those shootings are going to be mostly without incident--if someone pulls a gun on a cop nobody can fault that cop for doing what they were trained to do--but police officers are people, and people are subject to occasionally overreacting or blatantly doing something horrible.

There are undoubtedly a number of bullets that a number of police officers would love to have back. And while I understand that's a difficult decision for a cop to make, I think we should know about those things. Certainly, in those rare incidents where a police officer flat out murders someone--a thing that might not be likely, but we can all agree is extremely possible--we should know about that too.

I'm not going to speak on race. I'm a white guy in the northeast. Our record in terms of helping people with our race-related opinions is, to say the least, pretty damned poor. It's not our strong suit. I don't know if you're more likely to be hounded by the cops if you're a black person. I do know that tying yourself to road barrels and barricading off I-93 (happened last year) is not the way to go about sending the message that we need to treat people better. But there is a ton of stuff in that regard that I don't know, that I can't know, and that it would be pretty much wrong for me to comment on.

I will say though that police officers are in a position of authority and power, and while I want them equipped to do their jobs I also want people watching them like hawks. Because in my book we should never take power lightly. Also because, for police to be effective, they need to earn some modicum of trust with their communities, and if we don't get to know things like "how many people do you kill in a given year in the course of doing your dangerous job" then maybe "trust" is a bridge too far. After all, in states like mine, who do you think enforces all those gun restrictions people get so mad about? Kind of not much to ask that they use theirs properly.

Agreed. But then, who would watch the watchmen?
The follies which a man regrets the most in his life are those which he didn't commit when he had the opportunity. - Helen Rowland, A Guide to Men, 1922
Top

Why, the Police Cops, of course. 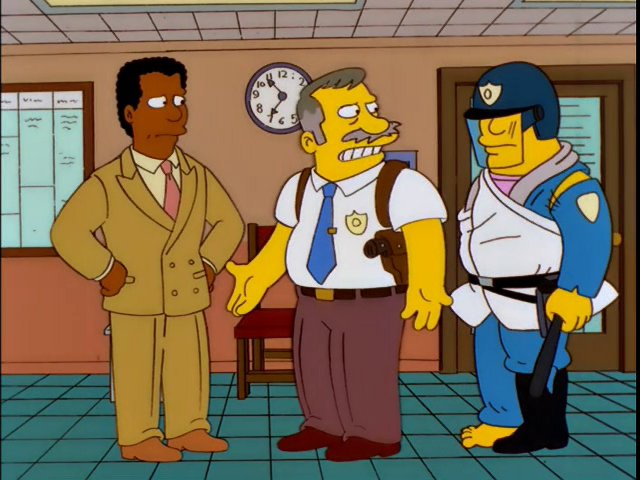 Deacon wrote:Agreed. But then, who would watch the watchmen?